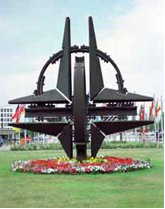 Partnership for Peace (PfP) is a major initiative introduced by NATO at the January 1994 Brussels Summit Meeting of the North Atlantic Council following the aftermath of the Cold War.The Partnership for Peace (PfP) is a programme of practical bilateral cooperation between individual Partner countries and NATO. It allows Partner countries to build up an individual relationship with NATO, choosing their own priorities for cooperation.

Based on a commitment to the democratic principles that underpin the Alliance itself, the purpose of the Partnership for Peace is to increase stability, diminish threats to peace and build strengthened security relationships between individual Partner countries and NATO, as well as among Partner countries.
The essence of the PfP programme is a partnership formed individually between each Partner country and NATO, tailored to individual needs and jointly implemented at the level and pace chosen by each participating government.

NATO and its Partner countries hold regular consultations on a wide range of issues. Their forces exercise together and serve alongside each other in NATO-led operations. And they are working together against terrorism.
They also cooperate in areas such as defence reform, countering the proliferation of weapons, curbing the threat posed by landmines and stockpiled munitions, disaster preparedness, and scientific research.

Through the Euro-Atlantic Partnership Council, NATO and Partner countries engage in regular consultations on a wide-rage of security and defence-related issues.
These range from general political discussions, for example on crisis-response missions and regional issues and tensions, to more technical exchanges on issues such defence reform, budgeting and planning.